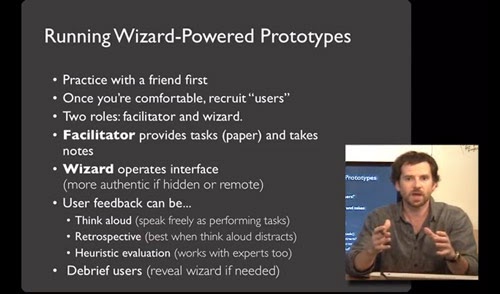 Hosted by Coursera, this Human-Computer Interaction course from the University of California in San Diego is presented by Scott Klemmer, Associate Professor of Cognitive Science and Computer Science and Engineering. It presents the concepts of prototyping, comparative evaluation, the principles of visual design, of perception and cognition. To sum it up, it helps building human-centered design skills.

With a duration time of seven weeks, this course is divided into seven modules, namely: introduction, needfinding (getting design insights from users observation), rapid prototyping, heuristic evaluation, direct manipulation and representations, visual design and information design, and designing experiments. Each module is made of four to five videos with a medium duration of 15 minutes. Each video contains one or two in-video quizzes which let seep in one of the most important points of the course. There is a total of four quizzes during the course, hence each of them encompasses multiple modules. While all the video lectures are available from week one, the quizzes, as well as the assignments, can be taken only during a specific time frame with a due date.

There are six assignments throughout the course to build a design project. Three design briefs are proposed (and are also available in Spanish) and the student has to select one. As the assignments are built on each other, the end result is a completed design project. Needfinding, storyboarding, wireframing, building of a high-fidelity prototype, evaluation plan, and user testing: each step leads to the next.

There are three separate tracks for grading, depending on the tasks followed by the student: apprentice track (quizzes only), studio track (quizzes and assignments), and studio practicum (assignments, the student having received an apprentice or studio Statement of Accomplishment from a previous session). Each of them results in a Statement of Accomplishment if the final grade in 80% or higher.

In terms of accessibility, the videos can be downloaded, as the subtitles (in both .txt and .srt file format) and the slides. For the benefit of international students, the videos can be subtitled in a wide array of languages, depending of the video: English, Spanish, French, Portuguese, German, Turkish, Japanese and Chinese subtitles are often provided. The video lectures are also available on a YouTube channel.

The followed session, from June to August 2014, counted about 29.5 thousand participants.