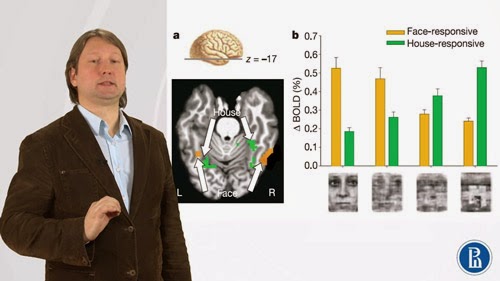 With the full title Introduction to Neuroeconomics: how the brain makes decisions, this course available on the Coursera platform is at the convergence of economics, psychology, and neuroscience. It is presented by Vasily Klucharev from the Higher School of Economics of Moscow (Russia).

The whole course moves towards higher levels of complexity, presenting the major factors affecting our decisions from single neuron activity to brain regions, to functions as cognition and emotions, up to society and biosphere.

The content of the each week consists of about five 8- to 10-minute videos and an after-video quiz of 5 questions. During each video the student also has to answer an in-video quiz of one question, which does not count for the final grade. The whole lecture notes can be downloaded in pdf form.

As there is no quiz after each video, the in-video question is a good way to keep the learner focused on the video content, even though its apparition could be quite disruptive while the video plays (but a visual indicator on the video timeline indicates when the in-video quiz is going to happen).

Each lecture (or week) ends with a quiz of about 5 questions. They contribute to 45% of the total grade. The final exam, for which we are only allowed one attempt, accounts for 55%. To pass the course, at least 60% of the total points have to be passed, and 80% to get a Distinction.

To sum it up


I took this course out of curiosity to better understand how the brain works, and to get some neuromarketing insights. But this course went way further than any direct usefulness as it raised deep questions about how evolution and biology govern our strategies, deeply rooted in our neuronal circuitry. It is thus very interesting to follow, with a lot of scientific experiments and papers to dive into, and its multidisciplinarity brings many lights from many directions, each of them very promising.

Decisions, Uncertainty, and the Brain: The Science of Neuroeconomics, by Paul W. Glimcher, The MIT Press (2003)